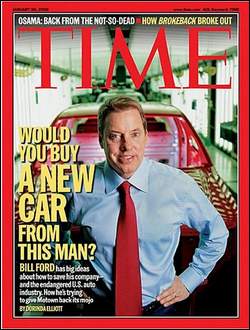 Some would argue that Ford makes cars that are garbage, but their latest ‘top secret’ project is trying to keep their cars out of the garbage after they have been used. On the same day that they company announced massive layoffs, news of the Piquette Project has leaked out, presumably hoping that this good news will distract us from the bad news. Named after the street on which the factory where the Model T was developed sits, the goal of the project is to produce environmentally friendly, recyclable cars.

The initiative was launched by Chairman and CEO Bill Ford Jr. last year. He brought together some of the best thinkers in the company. They were given a completely clean slate to start from scratch and create a completely new product. The challenge is to provide something that is both socially conscious and profitable. The first efforts of the project likely won’t be seen until 2008. It was to have remained secret, but Time Magazine leaked the existence of the project on Sunday. Toyota is also doing the same kind of research, but Ford insists it was doing it first.