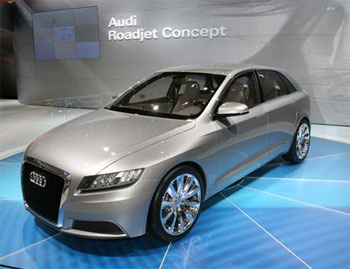 Audi introduced a concept car at the Detroit Auto Show that turned some heads. Now word is coming out that the Roadjet is going to become a reality. In fact, it should be hitting European roads soon, though it is unlikely to cross the ocean to the U.S.

The Roadjet lives in that junction where hatchbacks, wagons and SUVs meet. It fits between the A4 and the A6 on the size scale. Under the hood is a 3.2-liter V6 offering 300 hp which drives four wheels. A seven speed DSG transmission helps the car hit the 0-60 mph time of 6.3 seconds. The outside of the car looks ready to ready to go, but the inside will likely get an overhaul before it goes on sale.

In lieu of the Roadjet, the American market is more likely to see the Q5, which will look like the A4 or Roadjet from the ground, but will be much more like a rugged SUV to appeal to whatever it is that SUVs appeal to in North American buyers.