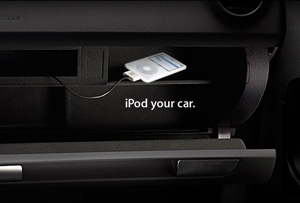 Michael Knight’s favorite toy is more and more looking like reality. Knight, played by David Hasselhoff, was the driver of KITT, a voice-controlled car in the 1980s American television show Knight Rider. And with the proliferation of portable electronic gadgets and the desires of drivers wanting them in their moving vehicles and car manufacturers willing to fill this demand, the automotive industry seems to have finally caught up with KITT, some 20-odd years later.

Cell phones, MP3 players, satellite radio, PDAs, DVD players, mapping tools—it’s all in someone’s vehicle, to varying degrees. And car and truck makers, wanting to cash in on what is a growing trend, are taking note, offering the beginnings of voice-activated controls for all of these devices.

Steering wheel buttons are increasingly common, not only in luxury vehicles. And with advances in technology, KITT is on the horizon.

“There’s fairly significant demand for ‘button intensive’ features in the car (like) dual climate zones and satellite radio,” which has more than 120 channels, said Jim Pisz, national manager for partnerships at Toyota. “The future for us is in the ability to control all of these features by voice.”

Toyota, always eager to be in the vanguard of new technologies, has entered into an agreement with VoiceBox, a voice-search specialist in America, to pursue voice-activated operation of vehicles. The agreement is now in the stage of developing natural-speech technologies for Toyota’s cars. VoiceBox, also recently a partner with Johnson Controls and XM Satellite Radio, is on the forefront of a new digital wave of automobile functionality.

One main plan for VoiceBox is to improve the end-user experience of driving-directions applications, which are becoming standard in vehicles but which have limited vocabularies and functionalities. The software now being worked on is well on the way to meeting that standard, according to VoiceBox CEO Mike Kennewick.

“It looks for clues in what you’re saying and what you’ve said before to infer what you want, just like a human would,” Kennewick said.

When that functionality widens to let the driver feel in complete command and control via voice remains to be seen.