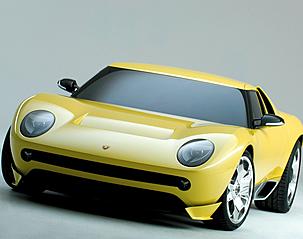 The recently displayed (at the Detroit Auto Show) Lamborghini Miura, part of a trend to produce blasts from the past, may not be built. Though the company had never released any information one way or the other about its possible production, its close-to-production appearance fueled speculation that a new Lamborghini was on its way. A company announcement today apparently squashes these rumors

Most distressing about this news is that the new Miura while paying genuine homage to the original model, actually improves on it. The rear section appears meatier, more substantial, like it holds a motor that ripples pavement. The front, in particular around the wheel wells, looks more like one piece, than that on the original. In keeping with an overall theme, the tires seem as wide as a sidewalk and the aerodynamics declare that this car while hold the road at insane speeds.

Enough salivating. It looks like Lamborghini will shelve the idea because the company is already producing the Gallardo and Murciélago models near capacity. But in the nefarious world of Italian high-performance cars, who knows what the truth is until models are actually produced?