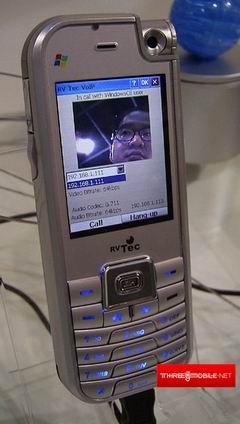 These days a purchase order for a bunch of phones does not seem exciting. This one for the C750w WiFi VoIP phone, however, implies a new market and new considerations for mobile device users. Hidden in the press release about the purchase order is a description of Claypso’s ASNAP technology. ASNAP facilitates switching between standard cell phone towers and any available wireless LAN. In addition, ASNAP lets users share signals with satellite radio carriers like Sirius Satellite Radio.

The phone, a C750w WiFi VoIp, has 2.2″ TFT LCD 240 x 320 screen and built in headphones, a USB cable and a camera. Nothing cutting-edge here. But the fact the phone automatically switches between available networks gives the mobile device the flexibility that implies the acceleration of VoIP acceptance. Considering that the phone is built on Intel PXA technology and runs on the Windows Mobile operating system, the temptation to call the C750w a computer that makes phone calls is high. When Calypso touts the broadband Internet access capabilities of the device, the tempation seems justified. The company also speaks of being able to interconnect with Skype.

Sernivo, the company purchasing the phones ($2.2 million worth), is a Cisco Systems registered partner, which should also tell you something. But for everyone from end-users to service providers the real news is the ASNAP technology. Not only is it a series of patents that promote interconnectivity between cellular and VoIP systems, but the license agreement structures will go a long way in to making the C750w and its successors highly flexible and cost-effective.