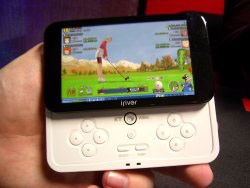 iRiver is planning a release this year in the U.S. that will make mobile gamers happy. Their V10 media player looks like a nice little unit. I say looks because we don’t know much more about it than the picture at this point. We do know that it has a slide out keypad and a slick 640 x 480 pixel VGA screen. We know that the keypad will be setup to make game-play nice and easy. We also know that it will be released sometime in 2006.

The rest is just speculation. There is buzz that it will be WiMax compatible so that you can play games against other V10 users. That, of course, is dependent on iRiver’s comfort that WiMax will be available enough to make it worthwhile. The other area of speculation is the memory. They have two ways to go. High density flash could provide somewhere between 8 and 16GB, while a HDD could push it up to 30GB. I’d probably favor the HDD, but iRiver’s past makes the flash more likely.