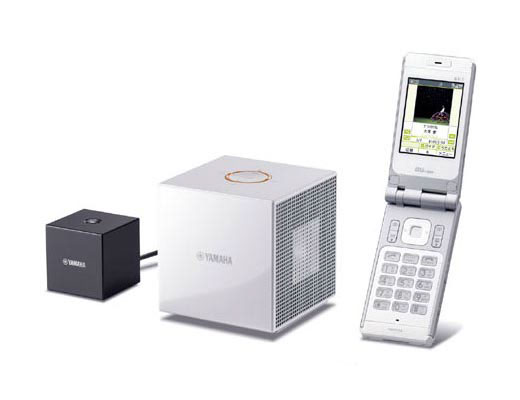 Glossy white speaker sets to go with your glossy white iPods are nothing new, but the trend in Japan is now shifting toward mobile phones. Cell phones there, with huge internal memory and expansion slots, are becoming major competition for standard DAPs, and as such, some speaker sets are starting to hit the market catering to this particular niche.

Yamaha is releasing a white compact speaker system (NX-A01) and Bluetooth receiver unit (TRX-RO1BT) designed to wireless connect with cell phones for a full music enjoying experience. The innovation will be released in partnership with AU, one of Japan’s major mobile providers. The cube speaker is quite small (3.3 x 4.6 x 3.3 inches), as is the black wireless receiver (1.7 x 1.8 x 1.7 inches), so don’t expect the sound to fill a concert hall. You can also connect the set to other media devices via a stereo mini cable.

Look for Yamaha’s Bluetooth stereo to hit Japan’s shelves some time in February at a yet-to-be-announced price.