One look at the new M50 phone by Taiwanese handset maker Dbtel and you will know the exact inspiration for it. Unfortunately for the company, Apple will figure it out, too, and they will almost certainly sue the pants off of Dbtel. To say that this phone looks a little like an iPod is like saying that the Pope is a little Catholic. In fact, Apple could just buy the units from Dbtel and they would have their iPod phone.

The phone will play MP3s as well as video in MPEG 4 and 3GPP formats. You can play back the video on the 176 x 200 pixel display. It has a 2 megapixel digicam with 16x digital zoom. The one area where it falls well behind the device it was designed after, though, is memory. It ships with just 16MB, but you can plug in an RS-MMC card to get more. The battery promises 210 minutes of talk time.

One odd thing you will notice looking at it is that there is no keypad. You choose the numbers using the clickwheel, so you would have to play with it to see how well that works. The device measures 9.9 x 4.5 x 1.8 cm and weighs 80 grams. Word is that it will ship sometime this week, but no word on where (most likely just South Korea), or what it will cost. 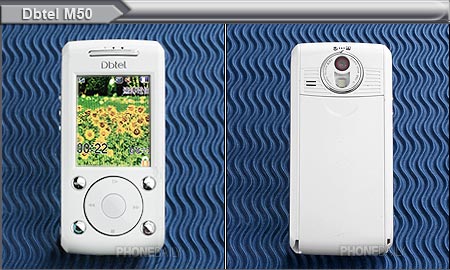