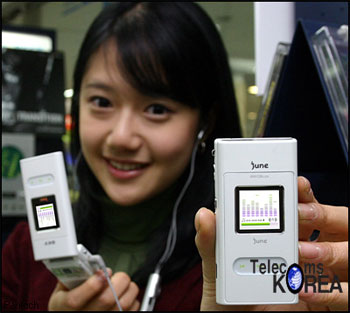 Korea’s second largest handset maker is set to release its newest mobile phone, the IM-U110, which they call the “ultimate mobile jukebox”. With 1GB of built-in flash memory, users have enough storage space for over 200 MP3 songs. Music is probably the biggest selling point of this boxy-shaped handset, but that didn’t stop Pantech from integrating a 2-megapixel digital camera in there as well. With a significant memory capacity, you’ll have enough room for over 1000 high resolution pictures or over 1800 games.

The compact and durable IM-U110, thanks to its semi-rugged exterior, is said to generate very little heat and vibration. A nifty feature of Pantech’s new “jukebox” handset is the inclusion of an external “touch sensor” pad, allowing users to control the music without having to flip open the clamshell. Multitasking and PictBridge functionality is also supported.

Set to hit shelves in Korea some time this month, look for the Pantech IM-U110 to be priced around the $650 USD range.