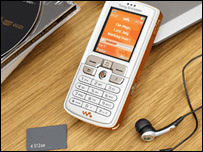 Sony Ericsson has reported record profits and sales for the fourth quarter of 2005, thanks in large part to strong demand for Walkman phones, such as the W550, W600, W800, and W900.

The Japanese-Swedeish company reported selling 16.1 million phones from October through December, an increase of 28 percent over the fourth quarter of 2004. The Walkman brand was a particular hot item, selling 3 million since August. Overall sales were 2.310 million Euros, an increase of 15 percent over 2004 Q4.

“This was another solid quarter for Sony Ericsson, and has enabled us to finish the year with great momentum,” said Sony Ericsson President Miles Flint. “We are now seeing the benefit of our earlier investments in R&D which have enabled us to expand the product line-up and successfully appeal to new consumers with products like the Walkman phone series.

Flint also said that the company was anticipating a 10-percent growth in the handset market in 2006. Not standing still, the company is hard at work on a 3G Walkman, which should be available soon.