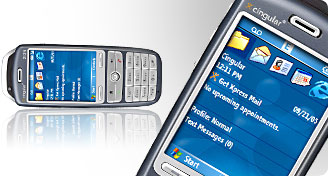 Cingular Wireless is now selling a cellular phone running Microsoft Windows Mobile 5.0 software. The wireless company on Wednesday unveiled the 2125 Smartphone, which has a typical cell phone dial pad instead of a keyboard.

This model, the first of its kind, is aimed at consumers more than business customers, said Cingular spokesman John Kampfe. Phones running the Windows Mobile 5.0 software can be purchased already in the U.S., but those have computer-like keyboards.

The 2125 Smartphone weighs just 4 ounces and comes with 64MB of SDRAM and 64MB of ROM built in. Talk time is up to 4 hours. Bluetooth connectivity is available, and Windows MediaPlayer 10 and Microsoft Office Mobile software are pre-installed. High-speed data access is made via GPRS and EDGE, and connectvitity is 850/900/1800/1900 MHz, for international compatibility.

The phone is available now from Cingular, with a price of $199, available with a two-year contract.