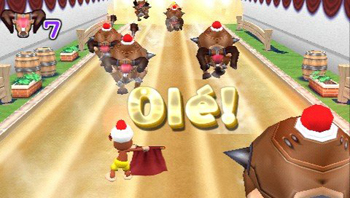 One of the most popular Playstation titles ever is coming to the PSP and chances are, you’ve never heard of it. Released in Japan almost a year ago, Ape Escape Academy for PSP is ready for its North American debut.

For those not in the know, here’s your Ape Escape primate-primer: madcap monkeys sporting intelligence-boosting helmets are bent on world domination. Your job: round ‘em up. Simple concept, and that’s why it works so well.

A departure from the original AE series, Ape Escape Academy for PSP puts you in control of one of these cute little simian swingers. As the title suggests, you take your fun and furry friend through school in a series of 40 original mini-games, including hockey, dodgeball, karate, rhythm dancing and more. Each of these games falls into one of three areas of study: Mind, Body and Technique. The game’s goal is to take your monkey to the head of the class.

A family friendly adventure for gamers on the go, Ape Escape Academy for PSP is available now wherever you buy games. Expect to spend about $40.