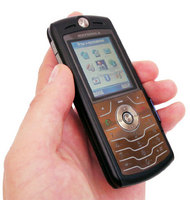 As one of the world’s forefront mobile phone manufacturers, Motorola is known for releasing models with wide-reaching appeal. The company is focusing its efforts in Q1 in promoting what it considers to be the four most promising handsets during this period: SLVR, PEBL, CDMA RAZR, and V325.

UBS Securities recently reported that the underwhelming shipment of the SLVR and PEBL in Q4 2005 will be answered with an upped production of the two handsets in this quarter, key to the company’s profit. Motorola will also start supplying CDMA phones to Sprint in Q1, further adding to the handset maker’s bottom line. A strong product portfolio coupled with increased penetration into emerging markets will help Motorola to continue gaining market share.

The SLVR is a super slim candybar featuring SCREEN3 technology for zero-click access to news, entertainment, and other premium content. MP3 playback, WAP 2.0, VGA camera, and Bluetooth connectivity are among its other selling points. The PEBL sports an oval design with a dual-hinge mechanism, SCREEN3, and video capture. Everyone’s favourite slim flip phone, the RAZR, ventures into CDMA accompanied with nearly identical features as its GSM cousin. The V325 is an entry-level clamshell with VGA camera and BREW technology.