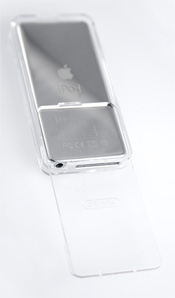 So, you want to protect your tiny little digital audio player, but don’t like the look of having a green, black, or blue rubbery cover on your iPod? Look no further than Griffin and their newest addition to their iPod iAccessory line: the iClear. Protect your nano from bumps, drops and spills with what they claim to be nearly invisible iPod armour.

It’s nice and light (it wouldn’t exactly be pleasant if a case was too beefy, after all), but it’s strong enough to keep those scuffs off the scratch-prone iPod nano. Slip into the polycarbonate sheathe, and you’re literally in the iClear.

Griffin isn’t the first to release super transparent cases for the nano, though. A smaller company, known as Agent 18, launched a very similar product back in November. Besides differences in marketing ability, the main thing that differentiates between the two companies’ offerings is that the Agent 18 case is comprised of two pieces that snap together, whereas Griffin’s product has a slide-on back piece.

You can pick up what Griffin calls “invisible bling” for $19.99.