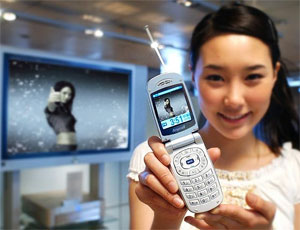 For the first time, Samsung passed the 100 million unit barrier in sales of handsets in 2005. That’s not enough for them, though. The company is aiming to increase sales to 115 million units this year.

Samsung expects that the global market for handsets will grow by 5-10% this year. By setting their target at 115 million, they are expecting their growth to exceed the market average. They also expect that the share of megapixel camera phones, 3G phones, MP3 phone and mobile TV phones will all grow in the total sales numbers for the year. Samsung expects that MP3 players will soon be a standard feature in all phones and that slim phones will dominate the market. Emerging markets will also play a large part in the growth of sales, though they will obviously be looking for lower cost handsets.

For their part, Samsung is expected an extremely profitable year. The first quarter will be particularly good, due to good sales of the D600 and the release of several new slim phones.