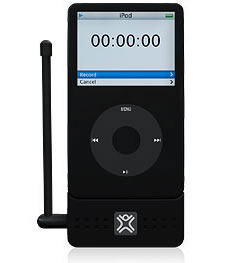 Yet another accessory has been announced for the iPod. This time around the 5G Video version gets a new voice recorder set from XtremeMac. The MicroMemo latches on with a Dock connector at the bottom of the iPod, and reaches out with an included flexible-neck microphone to capture some high fidelity audio goodness. If you prefer, you can also plug in any standard 3.5mm plug microphone and still capture high fidelity audio.

Previous generations of the glossy white (and now also glossy black) multimedia player only allowed for mono 8-bit voice recordings, but with the introduction of 16-bit audio to the current incarnation, it was only a matter of time before the accompanying peripherals started pouring in. The MicroMemo runs off of the iPod’s battery, which is a plus. The included built-in speakers will allow for instant playback and review.

Expect the XtremeMac MicroMemo to hit the marketplace in late Spring, with a price tag of $79.95.