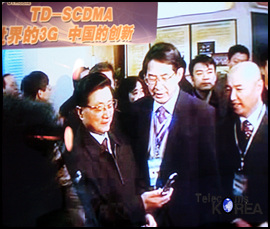 Many economists have recognized that China will become one of the world’s largest and fastest growing markets in the coming years, and as such, everyone wants to cash in on their piece of the pie. Samsung Electronics, the worldwide leader in CDMA handset sales, announced yesterday that it has demonstrated TD-SDMA video telephony in the land of the dragon.

Using the Samsung SGH-T560, the company seamlessly transferred video data at speeds of up to 384Kbps. This will be excellent for the expanding Chinese market, especially in the business districts of Shanghai and Hong Kong, for example. According to the Korean electronics manufacturer, this handset will be the first commercially available TD-SCDMA mobile phone. “Samsung is leading the global 3G market,” boasted Samsung President Lee Ki-tae, “introducing the most advanced technologies not only in CDMA2000, WCDMA but also in TD-SCDMA.”

This was not the first demonstration of TD-SCDMA video telephony on the part of Samsung, having already shown off the innovation in August of last year.