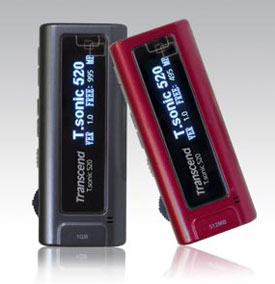 Transcend Information has just released a more interactive and versatile flash MP3 player, the T.sonic 520. What makes the T.sonic 520 stand out from the rest of the MP3 players is its ‘karaoke-like’ features. By displaying the lyrics of the song on its OLED screen, one could sing-along instead of just listening to the music being played.

Transcend’s new MP3 player also doubles up as a file storage device, allowing users to transfer files from his or her PC via its USB 2.0 connection. Using the T.sonic 520’s included software, one can even lock a PC and setup password protection for documents.

If you want to record music directly from your CD player, the T.sonic 520’s line-in function enables just that. Music can also be recorded directly from FM stations since this player also has an FM radio function. Station presetting is allowed to up to 20 channels. Voice recording is also possible as the T.sonic 520 is also a digital voice recorder.

Despite its numerous features, the T.sonic 520 comes in small at just 74x30x18.5 mm. It only needs one AAA battery which could last for around 15 hours. It’s also easy to carry at 28g without the battery.

The T.sonic 520 comes in 512MB and 1GB versions. It supports widely-used formats like MP3, WMA, and WAV.