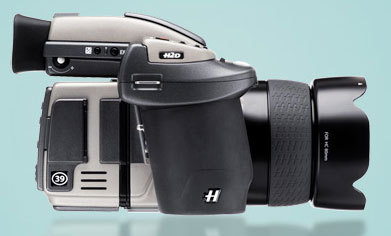 Clearly not marketed at the average point-and-shoot shutterbug, Hasselblad has announced what seems to be the world’s first 39-megapixel digital SLR camera. Of course, one of the major selling points is that absolutely insane 39-megapixel CCD, presumably provided by Kodak (who supplies Hasselblad with other CCDs).

The medium-format H2D-39 features a 2.2-inch OLED display, on which you can view your 78MB shots. You need not really despair about storage space though — this monster of a camera supports tethered hard drives. Look for lots of other goodies like new color-correction technology.

The same 39-megapixel CCD can be found on three other Hasselblad digital backs to pair up with Hasselblad H2 cameras, including the CF-39MS (Multi Shot), which, as its name implies, implements multiple exposures for optimum color accuracy. All should be made available to the public sometime this year.

If you’re wondering about pricing, the H2D will run you about $31,000. The CF-39MS will make an even bigger dent in your wallet, priced at about $40,000. So, get yourself the world’s premier medium-format 39-megapixel DSLR… or buy a Bimmer.