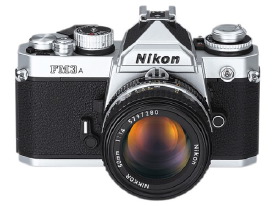 Nikon, one of the world’s most recognizable names in the camera industry, has announced that it will cease production on most of its film cameras and instead focus on digital machines. The move is not a new one, since Kodak and Canon have already gone that route. But it is a significant step for Nikon, which will also stop making most lenses for the two film cameras that it will continue to manufacture.

“The market for film cameras has been shrinking dramatically,” company spokesman Akira Abe said. “Digital cameras have become the norm.”

Industry experts insist that the Nikon announcement might prompt a temporary revival in film camera sales, from enthusiasts and collectors. Still, the move showcases the fundamental shift in technology and preferences from the traditional film to the easier-to-handle and -store digital.