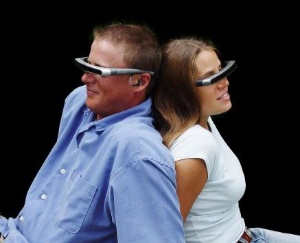 The new myvu personal media viewer by MicroOptical Corporation may turn you into a loner, but you sure will enjoy your solitude. The myvu viewer is some surprisingly sleek eyewear that incorporates video viewing and audio. The binocular viewers let you watch a large image right in front of your eyes and the earphones are integrated right into the arms of the glasses. It’s like watching a large screen TV anywhere you are – at home, the office or on the road.

The myvu viewer was unveiled in North America for the first time this week at MacWorld, so obviously it is targeted at the iPod market, though it isn’t just exclusively for that device. Though MicroOptical is based in Massachusetts, the myvu has already surfaced in Europe. In France, Orange has combined the myvu with the Samsung D600 phone for a pleasing portable viewing experience.

No word yet on availability or price. The myvu website, oddly, has yet to go live.