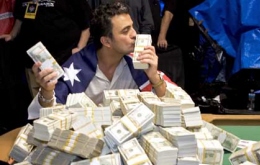 Don’t expect to be able to play a satellite tournament from your cell phone just yet, but you can expect to be able to download exclusive World Series of Poker (WSOP) branded mobile content some time this year. Harrah’s License Company, LLC, has teamed up with Glu Mobile in this new agreement.

Poker, especially No-Limit Texas Hold ‘Em, has quickly become one of, if not the most popular card game on the planet, despite its reportedly humble beginnings on a Mississippi steamboat. Harrah’s has previously formed partnerships with America Online for free-play online games, as well as with Activision for console versions of the WSOP poker games.

The World Poker Tour (WPT) is widely regarded as the main competitor to WSOP, with console and mobile content of its own. That said, the World Series of Poker prides itself in awarding the largest prize pools. Indeed, at the 2005 WSOP finals event, every player who made it to the final table walked away at least $1 million richer. The champion, Joe Hachem, won $7.5 million at the Main Event.