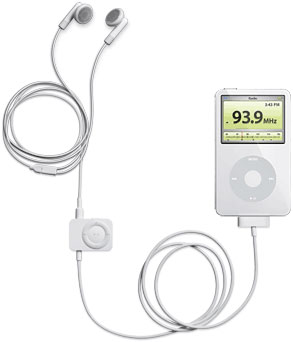 Keeping up with consumer demands for functionality in the amazingly popular iPod, Apple Computer announced on Tuesday the creation of the iPod Radio Remote. The result is an FM radio and remote control iPod, which can pull in FM stations and which also offers instant song or volume control without ever touching the iPod.

The announcement came during the annual MacWorld exposition in San Francisco and was just one of what is expected to be a flurry of product announcements.

Greg Joswiak, Apple’s vice president of Worldwide iPod Product Marketing, was enthusiastic in endorsing the new product.
“The iPod Radio Remote is both the best remote control and the best FM radio listening experience for iPod,” Joswiak said.
Station and song information from radio stations supporting the Radio Data System (RDS) will be displayed on the interface of fifth-generation iPod and iPod nanos.

The iPod Radio Remote will retail for US$49 and will begin shipping immediately.