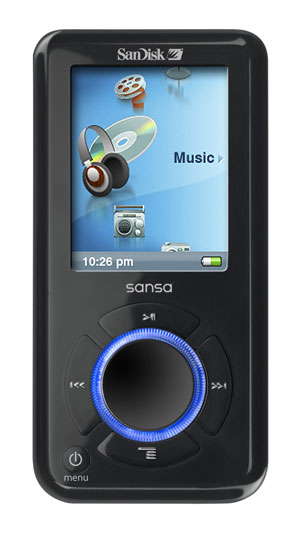 SanDisk seems to be leaving no stone unturned to give you that wow feeling if you happen to visit their booth 30329 at CES, Las Vegas. It has a new USB drive for video game lovers, and is also offering for music enthusiasts, top-of-the-line Sansa MP3 players. On Thursday, the company unveiled two new models of Sansa MP3 players — e200 series and c100 series. The more advanced Sansa e200 offers you a large color screen with 6-GB of storage capacity and the Sansa c100 is being offered in a value-conscious pack with a color screen and compact size.

Releasing Sansa e200 and Sansa c100 series, Eric Bone, Director Marketing (Audio/Video), SanDisk projected them as products which respond to the growing requirements of MP3 enthusiasts. “Music is an incredibly important part of the digital lifestyle, where the emphasis is on accessibility of music, styling and ruggedness on the go. These new players have a rich set of features, a high-strength industrial design and a friendly price tag that we believe will appeal to anyone who appreciates music on the go.”

The Sansa e200 series featuring Sansa e250, Sansa e260 and Sansa 270 is being offered in a new slim design with a 1.8-inch (4.572 cm) TFT color screen. With storage capacity ranging from 2, 4 and 6GB capacity respectively, and can hold 480, 960 and 1440 MP3 songs. SanDisk also seems to have taken special care in its designing and to do away with the possibility of scratches, its back cover has been made of Titanium alloy using Liquidmetal technology which is considered to be even stronger than steel. The e200 series also supports Microsoft PlayForSure and will hit the streets of Europe and US in March. The suggested retail price of e200 series are $199.99, $249.99 and $299.99 respectively.

Sansa c100 is more of basic MP3 player with a color screen (3.07 cm) and it’s available in 1 GB (Sansa c140) and 2GB (Sansa c150) capacities. It also supports Microsoft PlayForSure and has an in-built FM digital tuner which offers you the listening experience of as many as 20-channels. After their demonstration at CES, both of these models will be commercially launched in March in the US and European market and will carry a suggested retail price of $119.99 and $169.99 respectively. (All prices in US Dollars) 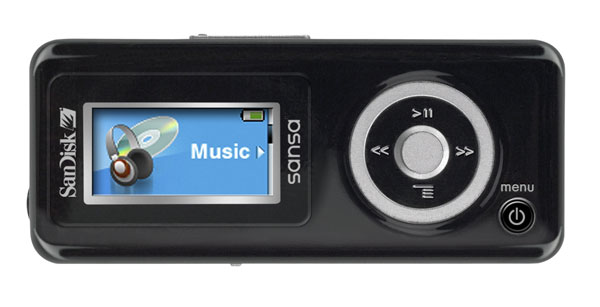