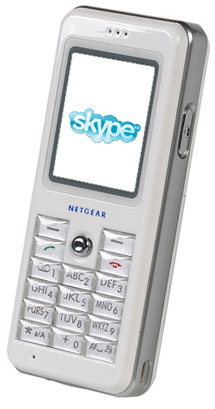 This week Netgear Inc. and Skype announced their intentions to launch the first wireless mobile phone for Skype.

According to a release from Netgear, the Wi-Fi mobile phone is designed to work wherever a user connects to a wireless Internet access point, be at home, office, cafe, public hotspot, or in cities where wireless access are available citywide. Whereas the existing models of Skype phones must be connected to a PC, including the cordless ones.

Several telephone manufacturers including Cisco owned Linksys are seeking to jump on the bandwagon of web-based calling craze introduced by Skype first in Europe and Asia and now in US. The craze is mainly due to the fact that users of Skype can make free domestic and international calls as well as hold conference calls with other Skype users. A call from a Skype phone to a regular phone incurs a small fee.

Patrick Lo, Netgear’s chairman and chief executive in a statement issued ahead of a press conference at the CES, 2006 underway in Las Vegas said, “Customers can now call anyone on Skype, anywhere in the world for free without using a PC anytime they are connected to Wi-Fi.”

According to a report from Jupiter Research published in October 2005, predicts that by year 2010 some 20.4 million US households will use form of Internet-based phone service.

The Wi-Fi phone from Netgear comes pre-loaded with Skype’s software. The user will just have to power on the phone and enter his/her username and password. The software pulls up the user’s full contact list of Skype contacts to whom free calls can be made.

According to a joint statement from Skype and Netgear, more information on about its Wi-Fi phone, including pricing and availability is planned for the first quarter of 2006.

The companies also announced that Netgear’s RangeMax wireless network router, which cuts of interference from neighboring wireless networks and eliminates “dead spots” that prevents consistent connections around a house, will be optimized to work with Skype.