Toshiba has unveiled a new line of gigabeat digital video and audio players which sport 1.8” hard drives. The company is clearing targeting the market dominance of Apple and their iPod. The S Series was developed working closely with Microsoft, so it runs the Windows Mobile-based Portable Media Center software. You can choose your S series in metallic blue, piano black or piano white and in capacities of 30GB or 60GB.

The alliance with Microsoft means that users will be able to access the Windows Mobile Media content that Microsoft has been amassing through partnerships with Tivo, MTV and others. (editor’s note: We talked about Microsofts partnerships in another story earlier today as well.)

The love-in doesn’t stop there, though. The players can be connected directly to the Xbox, letting you listen as you play. The Xbox will display album and artist info throughout your games.

The players feature a 2.4” QVGA LCD screen and they support the formats you would expect, but with an FM tuner, which is a step up from the competition. Battery life is good for 20 hours on a charge.

The S Series can connect directly to many digital cameras, allowing for easy transfer and storage of your pictures if you are an avid photographer. 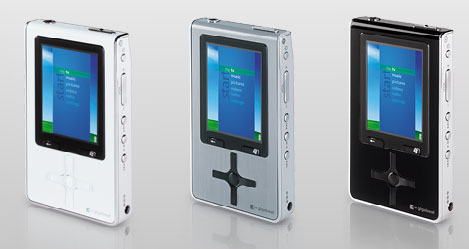