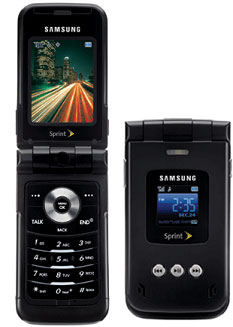 Korea’s largest mobile phone manufacturer is at it again. Six new slim-design phones were showcased by Samsung at CES, averaging less than a half-inch in thickness. Clearly, thin is in, but that doesn’t mean that you have to sacrifice multimedia functionality. Look for mobile TV, wireless web, Bluetooth connectivity, and 1.3 MP digital cameras/camcorders on all of these new phones from Samsung.

The North American market will be seeing the A900, t809, and d807. The A900 will take advantage of Sprint Nextel’s Power Vision EVDO network. Other features include full music downloads over the air, pictBridge, and an industrial magnesium body. The sliding t809’s large screen is said to evoke “the look and feel of high-end plasma televisions”. Bluetooth, MP3 with external speakers, and 70MB internal memory are among its features. Pick up this T-Flash expandable phone through T-Mobile. The quad-band d807 slim slider features a flash to go with its camera, MP3 playback functionality, and an expansion slot for microSD.

For the European market, expect the Z510, Z540, and P300. If thin is your thing, then look no further than the thinnest 3G phones in the Z510 and Z540. The 1.3MP cameras feature 4x digital zoom, and watch all your favorite streaming content on the full-color screen. Nicknamed “The Card”, the P300 multimedia phone is a mere 0.35 inches thick, and comes with all the usual bells and whistles.