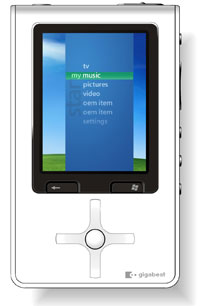 Microsoft’s reach is expanding again, this time in the realm of portable media centers. The Redmond, Washington-based software maker will begin pursuing recently inked partnerships with Toshiba America, Tatung, and LG Electronics in the pursuit of devices designed to blur the line between home movies and “home,” Microsoft Chairman Bill Gates announced in a CES keynote address on Wednesday.

The focal point of this agreement is the aptly named Portable Media Center, a mobile Windows-based machine that will showcase the new Starz online movie service Vongo. The idea behind the machines, of course, is to make TV and video more integrated with traditional PC functions, including synchronization of audio and video.

The media centers will include longer battery life, a PC-alternative photo and video transfer and storage system, and new levels of connectivity with Microsoft’s best-selling new Xbox.

The three companies are building slightly different machines:
– Toshiba’s has a 2.4-inch hi-resolution screen that sports more than 260,000 colors. The two models in the Toshiba S Series differ only in price and storage capacity. The 30GB model will sell for US$299; the 60GB model will retail for $399.
– Tatung’s offering has a larger screen, at 3.5 inches, but a smaller storage capacity, 20GB. No pricing has been announced.
– LG Electronic’s Portable Media Center has a 30GB hard drive that connects directly to your TV in order to stream live shows and music on the QVCA widescreen. No pricing information is available.

As with many other products being unveiled in Las Vegas this long weekend, these Portable Media Centers will begin to be available in the next couple months, at which time final pricing will also be available.