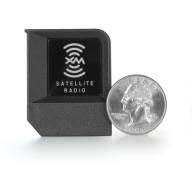 It seems that every other story today is about XM radio and their new products. This time it is the XM Passport, a tuner not much bigger than a quarter. It measures just 1.3″ x 1.65″ x 0.44″ and only weighs 0.44 ounces. This tuner is 40 times smaller than the original tuners released in 2001 that had to be mounted in the trunk of your car.

The XM Passport is completely portable. The cartridge contains the entire tuner. You can move it between XM ready devices, allowing you flexibility with a single subscription. You can keep a player in your car and another in your home. By carrying the Passport with you, you have satellite radio wherever you are. The Passport is just stuck into a slot on the docking station or in the device itself.

Audiovox will be distributing the XM Passport. It can be bought for $29.99 USD starting in the spring. It will also be bundled with the new Samsung Nexus XM/MP3 players when they come out in the first quarter of this year.