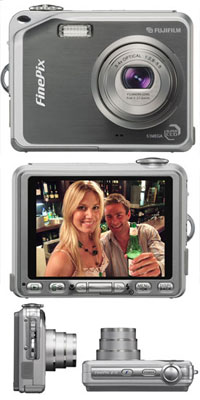 Fujifilm is heading into CES with four new digital cameras in an attempt to capture a big chunk of what has become an incredibly lucrative market. The FinePix V10 sports a 5.0 MP Super CCD HR sensor and Real Photo Technology, which provides reduced noise and the ability to snap pics at light sensitivities as high as 1600 ISO, but that’s not what will automatically catch your eye when you pick up the V10. It’s the huge LCD on the back—clearly aimed at those who were eyeing Sony’s T1 cameras—with 230,000 pixels and anti-glare technology. Featuring 3.4 optical zoom, look for the V10 in March with a price tag of $349 USD.

The Fujifilm FinePix A400 (4.0 MP) and A500 (5.0 MP) are a couple of twins that Fujifilm is giving birth to this year. Aimed at first time buyers, they offer simplicity of use combined with the company’s award-winning Super CCD image sensor. The cameras will have internal memories of an unannounced capacity and 3x optical zoom lenses. Look for the A400 ($149 USD) and A500 ($179 USD) in February.

The skinny on the new FinePix F470 is, well, it’s pretty skinny at less than 20 millimeters thick, but that’s not to say it will be short on features. A 6.0 MP CCD sensor is paired with a 2.5-inch LCD to take and view some high quality snapshots. The 16MB internal memory is a “just in case” feature for if/when your memory card is at its capacity. Available in March, the F470 will be $279 USD. 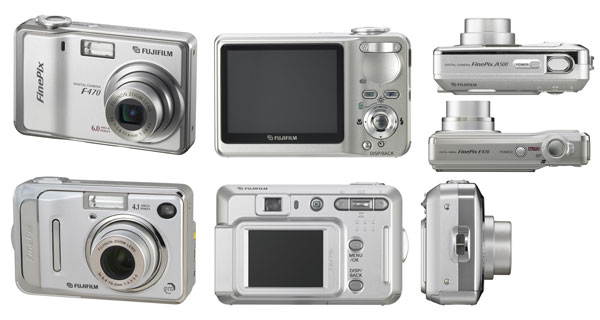