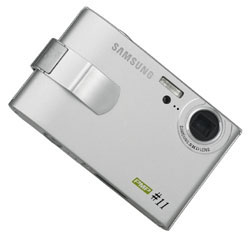 More news from our friend Samsung of Korea. One of its subsidiaries, Samsung Techwin, has unveiled a new digital camera somewhat appropriately named the #11PMP for its built-in personal media player capabilities. The camera features a more than adequate 6.0 megapixel sensor, at least for the average consumer. Then again, if you’re a professional photographer or even a pro-sumer, the lack of optical zoom whatsoever is a serious hindrance to whatever shots you hope to capture.

One of its major selling points is that it is incredibly thin at about 18.5mm, which in a way, explains the lack of optical zoom. In this way, the design is somewhat reminiscent of the Minolta Dimage line, with the exception of the money-clip looking thing on the front of the #11PMP, but the Minolta cams at least had optical zoom.

On the PMP side of things, the internal memory is severely lacking at an inadequate 45MB, but that should be easily expanded via whatever memory the gadget will end up taking. Expect the #11PMP to accept one of the usual multimedia formats, though there has been no official word yet to confirm which.

With an MSRP of about $450 USD, the Samsung Techwin #11PMP should hit shelves sometime this month.