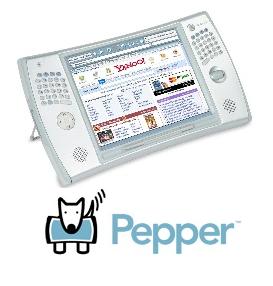 Pepper Computer Inc. is best known for its innovative Pepper Pad, a 2.3-pound handheld computer ($849.99) with an 8.4-inch touch-screen TFT LCD and broadband connectivity. At this year’s Consumer Electronics Show in Las Vegas, the Pepper Pad is on display with a number of upgrades over generations of old.

On the software end of things, Pepper has integrated a number of popular services like the Flickr photo-sharing of Yahoo!, Mobipocket’s eBook reader, and TitanTV’s program guide. New units will start shipping later this month with the Version 2.1 software, and existing Pepper Pad owners can download the software free of charge. They’ve also reportedly sped up the performance of the Pepper Pad.

In the hardware department, the company is set to launch the Pepper Pad Plus, which comes with an impressive list of specs and features. Look for a 60% longer lasting battery, 802.11g connectivity, 30GB hard drive, Bluetooth 2.0, SIP (VoIP) capabilities, and Universal Plug and Play (UPnP) for streaming content from other UPnP devices and PCs. Look for the Pepper Pad Plus sometime in Q2.

Pepper also announced that they have licensed the Pepper Pad technology to HANBiT Electronics of Korea. The Korean company will produce and market the handheld computer under the Pepper brand worldwide.