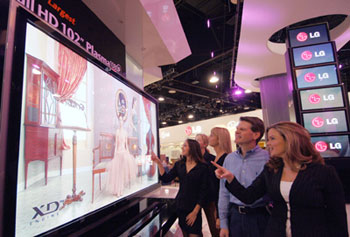 CES 2006, which will commence in Las Vegas on Thursday, is all slated to become a major showcasing platform for LG.Philips, a global innovator in liquid crystal display (LCD) technology. The company has decided to reveal its advanced thin-film transistor liquid crystal display (TFT-LCD) suite in the exhibition, it is projected to give a major quality boost to the functionalities of HDTVs, desktop monitors, notebook PCs, digital information displays and other applications in the near future.

To begin with, LG.Philips LCD will be demonstrating its award winning 55-inch wide full high definition (1920 x 1080, two megapixels) panel for HDTVs. This panel is projected to achieve a dynamic contrast ratio of 1200:1. In addition to this, LG Phillips will also be displaying 47-, 42- and 37-inch wide full high definition TFT-LCDs for TVs that are capable of delivering dynamic contrast ratio up to 1600:1. These panels are believed to mesmerize you with their several advanced features including wide viewing angle of 178(degrees), maximum brightness of 600 cd/m2, and a high color gamut.

LG Phillips efforts to revolutionize LCD’s high resolution capabilities will be put across to the prospective consumers through the display of its 55-, 47- and 42-inch wide UXGA (1920 x 1080) portrait mode digital information displays. In addition to these, they will also demonstrate its slew of advanced TFT-LCD panels for premium desktop monitors and notebook PCs, and the world’s largest and highest resolution 30-inch wide QXGA+ (2560 x 1600) LCD monitor panel, a 26-inch wide UXGA (1920 x 1200) LCD monitor panel and the world’s largest 20.1-inch notebook PC panel.

However, to conclude that LG.Philips LCD will only be showcasing high-end, cutting edge products would be erroneous. If you are interested in smaller appliances or applications, then the company’s stall in the exhibition will have plenty to offer you. You can expect a series of applications such as car navigation systems, automotive entertainment, portable AV devices, mobile phones and the 10.1-inch flexible e-book display, the largest flexible active matrix display prototype shown. The company simply seems to be participating in this year’s CES with the sole motto of making most of it.