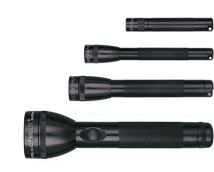 It’s been a long time coming. Maglite, a giant in the flashlight market, has finally entered the LED market.

Maglite is largely recognized as the leader in manufacture of heavy-duty flashlights that provide a wide controllable beam and excellent visibility. And with the advent of LED technology in other markets, it was probably only a matter of time until the company adopted that technology in its products. After all, LEDs can provide brighter light and lower power consumption than a handheld powered by more traditional (read: incandescent) technology. The beam-focusing capability that in some ways defines the Maglite brand will also be found in the new MAG-LED line.

According to the company’s website, Maglite will be pumping out the MAG-LED products sometime in early 2006, and like all their other products, these new flashlights will “have the style, performance, benefits and features that both professionals and consumers have come to expect from a Maglite flashlight, including the fact that they are built for a lifetime of service.”

Current Maglite offerings run from the very small to the very large, with the smallest model able to run on just one AAA battery and the largest model requiring 6 D batteries. Whether the new MAG-LED products will come in all shapes and sizes remains to be seen.