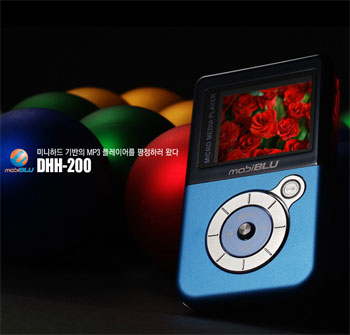 Not many people in the market for a new MP3 player have heard of MobiBlu, they are the ones with the tiny cube of a thing that launched earlier this year. Now they have a hard-drive based player which bears some resemblance to many other HDD players out there (think iRiver, iPods, and others of that ilk).

They say that the new MobiBlu DHH-200 will come in two versions, with 6GB and 8GB micro hard drives. The little colour screen will show you what song’s playing (obviously), but it’ll also do the picture-viewing thing (JPGs only) and video playback (Babelfish seems to tell me that you’ll need to convert your ASF, MPG and AVI files to some propriety format).

Other features include the standard digital clock, FM radio and sound recording. Like many other players targeted at Asian markets, the DHH-200 comes with some more varied language support: Korean, Japanese, Chinese, and of course, English for us in North America.