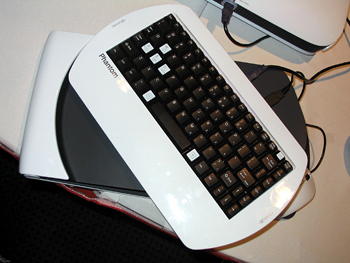 Infinium Labs Inc. is developing a PC wireless keyboard and mouse designed specifically for gaming. The Phantom Lapboard facilitates a more intuitive interface—historically, the one major weakness PC games have had compared to console gaming—and has all you lefties in mind, too. The keyboard can rotate for either right- or left-handed gamers, with two sets of inverted T-directional keys.

With the release of the Xbox 360, everyone’s attention has been drawn to console gaming, but that doesn’t mean that people have completely neglected their PCs. Many people have computers that are practically dedicated to playing games—like World of Warcraft, for example—that would be either quite lacking, or frankly, quite disappointing if ported over to a console.

Infinium’s Phantom Lapboard has a range of 30 feet, places the mouse under the keyboard to keep hands closer together, and features full-size keys and an extended space bar—all in the name of optimizing your gaming experience.

The Lapboard is part of a broader online offering to be delivered by Infinium, including a wide-ranging library of broadband games with both the avid gamer and the casual participant in mind.

No price for the lapboard has been announced yet, but expect it to hit stores during Q2 2006.