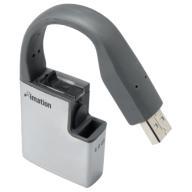 It may look like your standard gym lock, but the Imation 4GB Micro Hard Drive is quite a bit more. The shackle is a rubbery flexible USB connector that’ll let you connect it directly to your Windows, Mac, or Linux computer, and when it’s not in use, you can lock the connector back into the portable hard drive itself. This way, it can loop onto your belt or dangle it from your briefcase.

This new portable storage device makes use of Toshiba’s tiny hard disk drive—a Guinness World Record holder at less than an inch in diameter. The Imation device was recognized as a 2006 Innovations Design and Engineering Awards honoree in the “Computer Components” category. Keep your files secure with the built-in 128-bit encryption and the supplied Security Manager Software, the latter of which will work on Windows and Mac but not Linux.