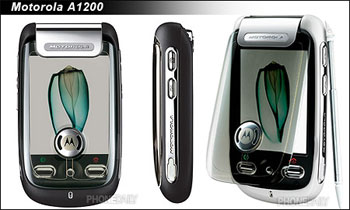 It’s not even out yet and people are already getting giddy about the soon to come Motorola A1200. It has a transparent protective screen that gives the mobile phone a clamshell-like feel. And it’s tough too; it will not break even if you drop it.

The A1200 features a touch screen as an input device and boasts of being able to recognize normal handwriting be it in English or Chinese. It sports a 2.4 inch 240×320-pixel QVGA TFT screen and weighs just 95 grams. It also comes with a 2 megapixel camera so you can capture great photos and a built-in music player so you can listen to your favorite audio files. If you have too many image, video and audio files, you can easily increase the cell phones’ storage capacity via a T-Flash up to 512MB.

Get email all the time? Don’t worry; the Motorola A1200 enables you to set-up POP3, IMAP4 and/or SMTP email.

The Motorola A1200 is set to be released in February 2006. It will initially be available in China, Taiwan and Hong Kong.