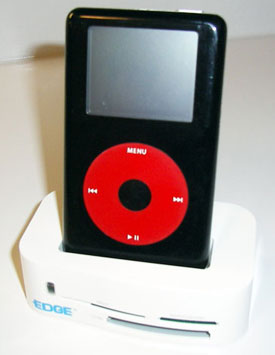 Convergence, it’s the hottest thing out there… don’t let anyone tell you otherwise. Everyone likes to have seemingly disparate devices combined into one über device that probably won’t work as well as the two (or more) devices separately, right?

EDGE, a company that isn’t exactly synonymous with iPod accessories has come out with their very descriptively named “Dock & Multi Flash Card Reader for iPod,” and I had the chance to try it out the other day.

One thing you can say about the dock when you first pull it out of the packaging is that it does feel nice. The construction is tight, and it has enough weight to it to make you think that it won’t go flying around your desk while you attempt to dock your precious pod-of-i. Measuring about 3.93” x 2.36”, it’s a good size as well. That, combined with the always pleasurable “iPod white,” will make sure it doesn’t get lost in the mix either.

The main point of this convergence device is to combine, as the name implies, a card reader and an iPod dock – but it also goes a bit further, by including an audio-out (3.5mm jack) and S-Video jack. This can come in handy if you’ve got a newer iPod like the Photo. It’ll let you listen to your music through your home audio solution, as well as display your pictures on your TV. But, don’t get hopeful that you can output your new videos… that doesn’t work.

The card reader portion of the device supports all the most popular formats (CF, SM, SD, MMC, MS, and xD). Yet, for reasons unknown, it doesn’t support what would seem like the perfect innovation for a device like this: transferring of media to and from the iPod to the flash cards. Missed golden opportunity? I’d say so.

The device also shows that it’s glaringly just another slapped-together convergence idea by the fact that you require both the iPod cable and a USB (2.0 thankfully) cable. Why can’t they combine the two? They both use USB fer-god-sakes. 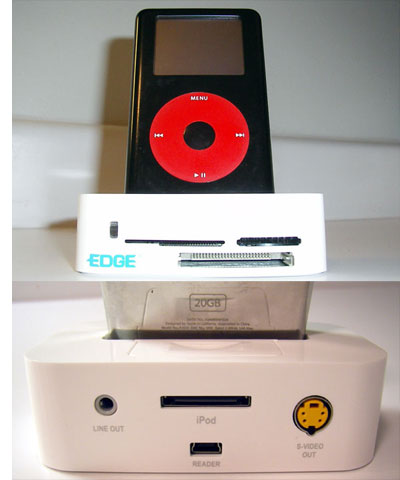 When all is said and done, the EDGE Dock &….(yadda-yadda-yadda) is just your run of the mill iPod dock. The functionality that could be gleamed from having the card reader integrated is probably going to go unused by most, as we all have about 20 different card readers already. And, if you don’t, you can pick one up for about 10 bucks – a far cry from the $49.99 USD that the EDGE dock will set you back.

The video and audio-out on the dock may thrill some, but there are much better options out there than this which will net you superior sound quality.

If nothing else, at least it looks half-decent.

Cons:
– Doesn’t support things that seem like they should be a given (ie. Video displayed over the S-video, and convergence between the card reader and the iPod itself)
– There are better docks out there that don’t tack on a card reader for the sake of having a card reader