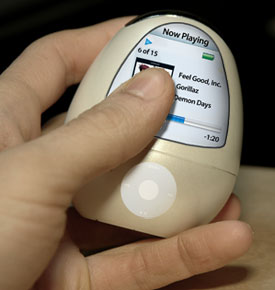 This hoax on gadget news brought to you by Jennifer Thompson.

Boulder, Colorado: Apple unveiled the highly anticipated next generation iPod, the NaNuNaNu ( the “Nanu2”) just before the popular Consumer Electronics Show in Las Vegas. The inspiration for the newest podling is the hit eighties sitcom “Mork and Mindy” staring Oscar winning actor Robin Williams, and the slightly less successful eighties sweetheart, Pam Dawber. The hit series featured Mork, a misfit on his own planet because of his sense of humor, who as sent on a mission to observe Earth’s more primitive society and report back telepathically to his leader, Orson. He arrives in Boulder, Colorado, and meets Mindy McConnell, played by Dawber.

Jobs, on hand for a press conference after the product demo, was visibly taken with the new product and seemed to attribute to it a more personal affectation than the Mini and the Shuffle. He was quoted as being a “huge fan” of the show in the early eighties.

“I remember sitting in front of the tube for hours watching Mork’s adventures on our console television. My favorite episode was the one where the Fonz set him up on a date with Laverne. I don’t think I have laughed so hard in my life. I always fancied myself as a bit of an Orson. Also, that Mindy was a real hottie.”

Jobs also divulged to reporters that he came up with the brainchild that became the Nanu2 while flipping through Sunday reruns on the Space channel.

“There I was, fingers extended in the famous Orkian position, and it hit me: this is a completely natural segue from the Nano not only due to the obvious similarity in name, but also due to the similarities between the iPods and spaceships in general”.

After a few initial design meetings and some resistance from the upper executive team at Apple, the Nanu2 was born. The Nanu2 is similar to its podling brothers in that it offers the same 2 and 4GB storage options and its streamline design makes it lightweight and durable. However, it is differentiated by its anatomically correct egg shaped design that incidentally measures four inches around, which veers markedly from the 3.5 x 1.6 x 0.27 inch current Nano specs. The in ear headphones or “orklings” reside in the core of the egg and are released when the pod doors are engaged. It, like the Nano, holds up to 1,000 songs and full-color album art but the Nanu2 also offers a bright, entirely wrap around 3.5-inch color LCD display. 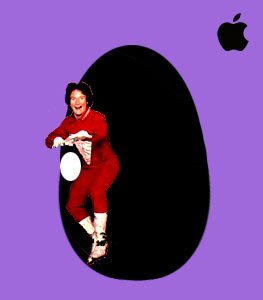 Apple has big plans for the Nanu2 and has launched a rather aggressive marketing campaign that will include both magazine and television spots planned for the key shopping weeks after Christmas. Julie Van Ness, Apple Corporate Communications: “We are trying to reach the 30-40 demographic with the Nanu2. Presenting an option in portable sound that reminds them of a time when TV was really at its finest will make them feel young again, make them proud to carry around an Apple device shaped like an egg. We are confident that the irony will not be lost on our valued customers who are a savvy bunch looking for a quality product and who refuse to be patronized by in-your-face marketing campaigns and trendy design. Besides, who could resist the signature red and silver (Mork’s signature spacesuit colours) tubes offered as accessories for the Nanu2?”.

The television spots planned for the Nanu2 will star some former Mork and Mindy cast members adds Van Ness: “Jonathan Winters, Mork’s son who was hatched from an egg on the show, will also appear in some animated guest spots. With each subsequent spot he will become visibly younger, until the ad that breaks on that last weekend before the holidays shows him donning the iPod Nanu2 as an infant. We’ve taken some liberties with Winters, who will be noticeably slimmer in the ads than he was during the original show. As an organization, we want to be cognizant of the obesity problem in this country”.

Critically acclaimed actor Robin Williams “Mork” has apparently also signed on to be to the new face of the Nanu2 which is available in stores as early as this week.

“In the past ads we have gone with a generic, faceless white shell of a human listening to some kind of box with a rope attached to that intimates gender or race only by the outline of a specific hairstyle like dreadlocks. We want to put a face to this product and follow in the footsteps of truly unique marketers like the Gap. We want that face to be the face of an Oscar Winner, Robin Williams.” Van Ness trails off, seemingly discombobulated.

With the purchase of a Nanu2 comes a free set of iPod tunes, including hits from Thomas Dolby, Kajagoogoo, and Devo.