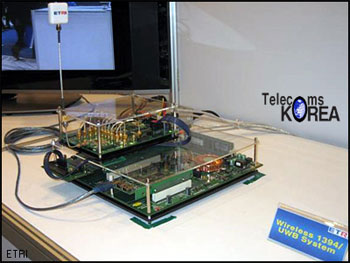 ETRI, a leading information technology research institute in Korea, recently demonstrated a new chipset that allows a two-hour movie to be transmitted wirelessly to a mobile phone in a mere ten seconds. The wireless 1394 technology is based on Ultra Wideband (UWB).

They also demonstrated a video clip from a camcorder being sent in real-time to a nearby digital television in all its high-resolution glory. ETRI jointly developed the UWB chipset with Samsung Advanced Institute of Technology (Yes, yet more news out of Korea that involves Samsung in some way). According to ETRI, a $20.7 billion market can be created by 2009 if wireless technologies, like those demonstrated, replace existing wired 1394 and USB connectivity.

ETRI is not the first to show off UWB systems—Wisair of Israel, and Alereon and Stacatto of the US having already developed the chip—but ETRI does hope to further develop the technology next year, integrating it with Bluetooth, USB and IP. The UWB chipset is projected to be made commercially available by early 2007.