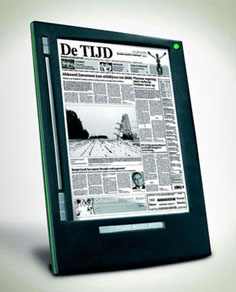 We’ve seen the news about ePaper technology, which allows images to be displayed on a flexible, paper-thin canvass of sorts. Well, ePaper can now live up to its name with a new ePaper device that’s big enough to read an eNewspaper or eBook. iRex Technologies, a spinoff from Philips, is set to launch the ER 0100 (also known as the Iliad) probably in April of next year.

Granted, ePaper has nowhere near the refresh rate you find on today’s LCD displays, but if you’re reading the news or your favourite eBook, who cares? The ER 0100 displays 8.1-inches of ePaper goodness at a max resolution of 1024 x 768, maintaining 160dpi fidelity. As far as processing power, expect a 400 MHz Xscale and 64MB of RAM. Storage comes in the form of 224MB of flash, as well as compact flash and secure digital expansion slots, and a spot for USB flash drives too. Control the Iliad using its touchscreen, and update it using a WiFi connection. It’ll take your plain text, XHTML and PDF files.

Price has not yet been announced.