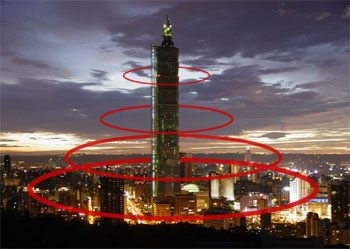 On Sunday Taipei’s Mayor Ma Ying-jeou announced that very soon, Greater Tapei will be the world’s largest wireless internet hot zone. The announcement was made at the opening ceremony online “brain-game contest” at Taipei City Hall and will include coverage area of 28 square kilometers.

Speaking on the occasion Mayor Ma Ying-jeou said, “Every city in the world is striving to become a place with as many wireless Internet connection points as possible. In two days, Taipei will establish a wireless Internet zone that covers 5 percent of the city’s most-populated area. From June or July next year, around 90 percent of these areas will be provided with wireless access”.

The areas which are covered include Taipei’s Shihmending, Hsinyi and areas around Taipei Main Station, with about 2,300 wireless access points visible.

The mayor in his speech further said tapei is in itself become a “hot zone” for wireless internet access when compared to other countries where the places to access wireless internet is often referred to as “hot points”. He further added that all the schools in Taipei will have wireless access and people opting for internet phone service will be provided with PDAs.

He concluded his announcement by saying, “Taiwan is the best computer-hardware manufacturer in the world and more than 90 percent of wireless Internet ports are made here. Plus, because of the government’s support of such a plan, Taipei is becoming a wireless city”.