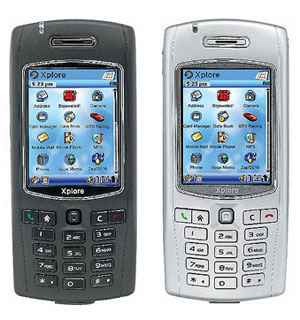 Another day, another phone. This one though, features a different OS than we have ever seen before. Group Sense PDA, which markets devices under the Xplore name, is launching a new bar handset powered by SavaJe OS, the Java-based open OS by SavaJe Technologies.

The phone itself is nicely featured if not unique. It sports a 176×220 pixel color TFT screen, 1.3 megapixel camera with video capture, MP3 audio and MP4 video players, Bluetooth, USB 2.0 and an SD memory card for 2GB of storage.

The SavaJe OS allows for simple customization. Deep-theming functionality lets you choose you applications and menus, as well as color schemes, sounds, backgrounds and icons for both built-in and downloaded software. The OS provides for a fully featured multimedia phone at a reasonable price.

Group Sense will be offering an Xplore handset using the SavaJe OS in Asia in 2006. They don’t have a large presence in Europe and the U.S., so they will look to tailor their products to the specific needs of operators in those continents.