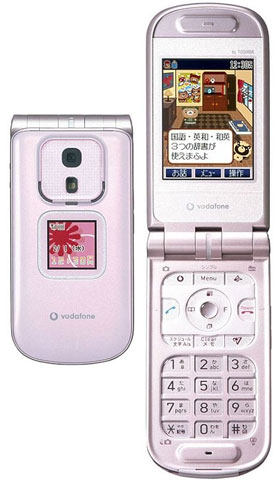 Toshiba has created the V502T phone to be released by Vodafone. It is a limited mode clamshell phone, which is apparently targeted towards children and the elderly. That means that it only does a few things (four in this case), and it makes the use of those functions simple. It is a step up from the very basic childrenâ€™s phone because it looks like a normal phone. The four functions are phone of course, as well as digital camera, e-mail and music player.

The 2.5G handset has a miniSD slot to store music, which plays back in the AAC format and measures in at 51 x 103 x 20 mm with a weight of 119 grams. Other than that, specifics are pretty scarce. From looking at it you canâ€™t really tell what it is that makes it more appropriate for the young and old than other phones. The form of the phone looks fairly typical. Until you play with it a bit, I guess it wonâ€™t be clear.

No word yet on when, where and how much.