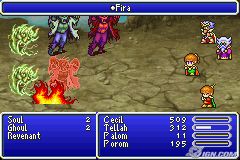 The Final Fantasy franchise has been around for some time now and has found itself on quite a number of gaming consoles. Well, the tradition continues with Final Fantasy IV Advance for the Gameboy Advance. It’s far from being a brand new game as this is basically a port from the old Super Nintendo/Super Famicom edition from many moons ago, except now you get to bring the adventures of Cecil, Kain and Rosa with you while you’re on the road.

The graphics are updated, but there is an occasional slowdown at times. A few small extras have been added to the classic game, including a new intro and two new bonus dungeons, but that’s not the real reason why someone would be interested in this game. According to Jeremy Dunham of IGN.com, “Final Fantasy IV is the one great RPG that truly cemented my passion for the genre.” The deep story and compelling characters will keep you captivated, and the harder difficulty setting will keep you hooked.

IGN.com rated Final Fantasy IV Advance an 8.6, with readers loving it even more, rating it a 9.4.