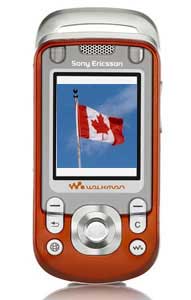 Look Canada, here comes the Sony Ericsson W600i, the great white north’s first Bluetooth-enabled Walkman phone. You may have read a bit about the SE 600i in the past, but in case you haven’t, here’s a rundown of features.

The SE W600i works on the Rogers EDGE network with quad band support for most countries around the globe. 256 mb of memory will let you store about 80 to 120 MP3 and AAC songs. Not 1500 songs in your pocket, be not a bad start. In phone mode you will get about 15 hours of audio playback, twice that in music only mode.

You’ll also find a 1.3 megapixel camera, video recorder and picture light. And what would a mobile phone be without games. The Walkman phone offers an enhanced gaming experience via its 3D graphics engine. Right out of the box you’ll be able to get your hands on Worms Forts Under Siege 3D, Extreme Air Snowboarding and Midways Gauntlet.

The SE W600i ships with Disc2Phone music transfer software, a MMC-60 music cable for stereo hook up and a car connectivity pack.

Canadians can expect to pay $299 plus GST and PST with a 3-year agreement from Rogers Wireless.