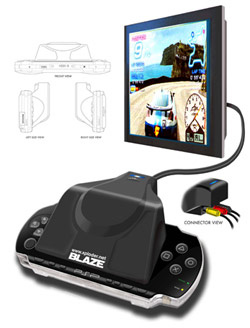 For those of you who own a PSP, but don’t have a PS2, playing SOCOM on a big-screen may seem like a little more than a pipe-dream. Well, Blaze has come through with what you could call the next best thing. Their new TV Adapter Kit is a device that fits over your PSP, acting kind of like a video camera, and connects via standard AV cables to your television.

Blaze didn’t exactly innovate the product—-there are already two other similar products on the market (PSP2TV and PSPonTV)-—but it does offer some advantages over other currently available devices. First, you don’t need to rip your PSP apart to make it work. Second, it costs about half as much. And third, it even has a NTSC-PAL switch to make it internationally-compatible.

Needless to say, picture quality isn’t nearly as good as a more direct source, but we hear it does the job reasonably well. You do need to focus the picture manually, and any fingerprints and dust you have on the Adapter or on your PSP will show up. That said, installation is a snap (less than two minutes according to lik-sang.com), but if you want the real deal, you’re better off with a PS2 (obviously).

The Blaze TV Adapter Kit for PSP is now shipping at a price of $59.90 USD.