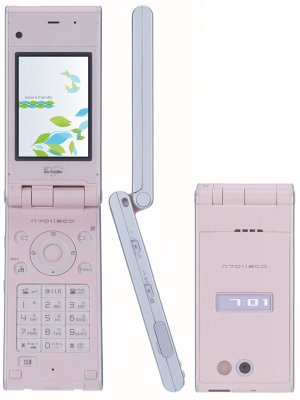 Up until now I would have argued that the best place for corn was on a cob, dripping with butter. NEC has a new product available in Japan which offers a far different use for corn. The company’s N701i ECO phone is an environmentally friendly phone. The body is made from plant raw materials – primarily starch and sugars from corn and potatoes. More than 75% of the phone body is made this way.

That doesn’t mean that the phone is edible. When it is eventually thrown out, though, it will decompose until just water and carbon dioxide remain. That’s clearly a big improvement over the plastic and metal in most phones which won’t biodegrade.

Despite the strange ingredients, the phone has the same functionality as the regular N701i. That means regular phone functions and videophone, among others. Not surprisingly, though, this phone is more expensive to make than the regular model. NTT DoCoMo is the company that has released it and they will be attempting to keep prices in line to make the environmentally sensitive choice viable.

This is not new technology for NEC. They have used the plant-based plastics in laptops as well.