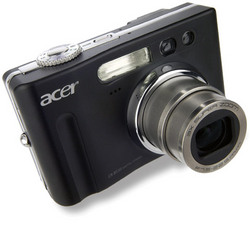 Acer is already a company with fairly good name recognition, and it is hoping to parlay that in its first foray into digital photography. Instead of putting out some bargain basement budget cam, Acer has opted to create the pretty sleek looking 8-megapixel CR-8530. The incredibly slim camera weighs a mere 150g and can shoot up to 3264×2448 pixels, more than adequate for the average point-and-shoot consumer.

Frame your snapshots using the 2.5 inch LCD display or the optical viewfinder, and take your pictures in the dark making using of the built-in red-eye-reducing flash. Take as little or as much control as you want, as the CR-8530 goes from full automatic to full manual, and the 3x optical zoom lets you get in close on the action. Different colour modes come standard, including sepia, vivid and monochrome.